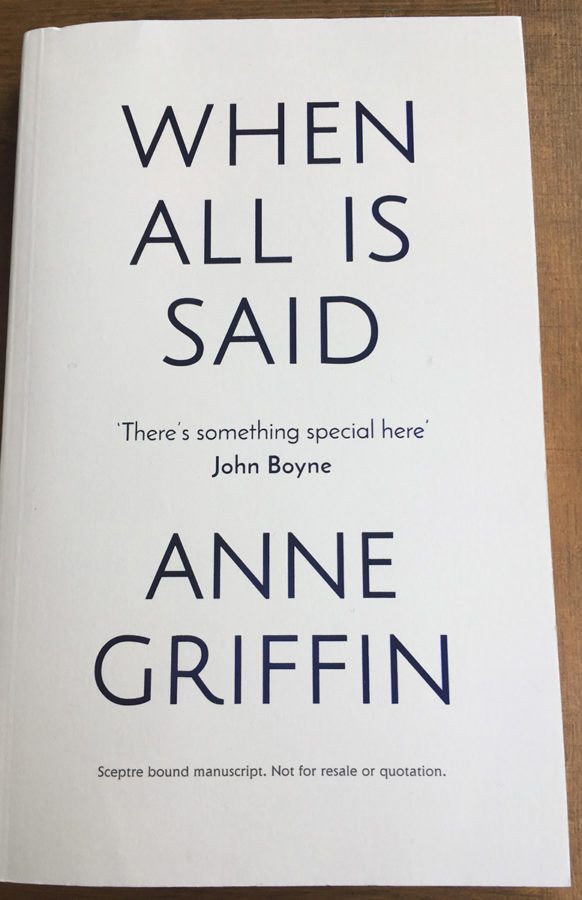 When All Is Said

Maurice Hannigan is a rich man, a distrustful man, a man with a drowning heart.

At eighty-four, Maurice sits alone at the bar of the Rainsford House Hotel in County Meath, Ireland, drinking a toast to the five most important people in his life.  With each glass raised, he measures his worth against the loyalty of his brother, Tony,  the innocence of his sister-in-law, Noreen, the honesty of his daughter, Molly, the talent of his son and journalist, Kevin, and, finally, the simple modesty of his wife, Sadie, who died two years prior.

But Maurice has a plan to get Sadie back.

He has sold his house, his business and given away his constant companion – Gearstick – his dog.  Tonight, Maurice is ready to die in a hotel in which he once worked for the Dollards, a family devastated by forbidden love and the loss of a valuable coin that Edward VIII had made for Wallis Simpson.  A coin stolen by Maurice at age sixteen in a fit of revenge against Thomas Dollard, the son, who beat him.  Its return fifty years later, brings about the death of the disinherited Thomas, the truth of his parentage, and the revelation that Maurice unwittingly saved the Dollards from total ruination.

In the honeymoon suite, Maurice, haunted by his countless empty promises to his wife, fears she might not want him back at all.  Through his torment he records his message to his son, telling him he cannot bear the loneliness of her loss anymore.   As he takes his last breath, Maurice calls to Sadie, asking for her to take him home.

This is a story of love, wealth and a broken-heart.